Great for all Parties

Our Pool tables are on wheels and can be set up in minutes. Bring out your inner pool shark! 4 feet wide and 8 foot long.

OBJECT OF THE GAME. Eight Ball is a call shot game played with a cue ball and fifteen object balls, numbered 1 through 15. One player must pocket balls of the group numbered 1 through 7 (solid colors), while the other player has 9 thru 15 (stripes). THE PLAYER POCKETING HIS GROUP FIRST AND THEN LEGALLY POCKETING THE 8-BALL WINS THE GAME.

CALL SHOT. In Call Shot, obvious balls and pockets do not have to be indicated. It is the opponent’s right to ask which ball and pocket if he is unsure of the shot. Bank shots and combination shots are not considered obvious, and care should be taken in calling both the object ball and the intended pocket. When calling the shot, it is NEVER necessary to indicate details such as the number of cushions, banks, kisses, caroms, etc.

Any balls pocketed on a foul remain pocketed, regardless of whether they belong to the shooter or the opponent. The opening break is not a “called shot.”

Any player performing a break shot in 8-Ball may continue to shoot his next shot so long as he has legally pocketed any object ball on the break.

RACKING THE BALLS. The balls are racked in a triangle at the foot of the table with the 8-ball in the center of the triangle, the first ball of the rack on the footspot, a stripe ball in one corner of the rack and a solid ball in the other corner.

ALTERNATING BREAK. Winner of the lag has the option to break. During individual competition, players will alternate breaking on each subsequent game. 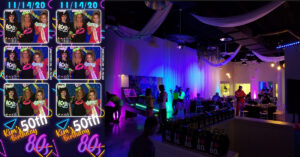